My nomad travels started in Wrocław, Poland. Open-air office, sleeping in the wild and other stories. 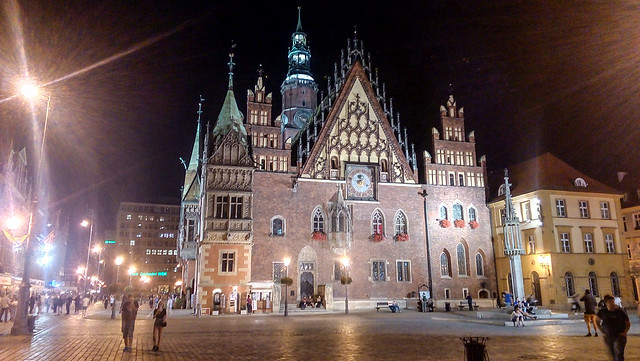 After all the preparations I finally set off to my digital nomad journey I was looking forward so long!

Yesterday my brother flew back to New Zealand, today it's my turn.

Before noon I went to my insurance company which offers a bit of money back for travel vaccinations.

Farewell with my parents, grandparents and our dog Růženka and I headed by train to Poland. Today's destination is Wrocław. A train ticket from Letohrad to Wrocław (a network ticket for Pardubický kraj & Poland) cost me 289 CZK. With a transfer in Klodzko it took about 3 hours and at the afternoon I was in Wrocław. In the train it was nice to look to the countryside and relax. Also I started writing the first article in the ADS-B series: Flight Tracking for the Curious.

At the railway station there was a wifi so I could immediately choose and reserve a hostel in the center. A 4-bed room in the Friends hostel was for 36 PLN. Not bad.

It was nice weather, hot, sunny and so I made a walk around the old town moat (a watter channel in front of the former town walls). There were even some fish.

I came around 6 PM. The room was quite nice, storey beds (a bit squeaky) and locking drawers at the bottom.

I had to relax a bit and in the evening I went to visit the own town just with a tiny backpack and my MacBook. I like the atmosphere of the city. It's not so crowded with tourists and full of souvenir shops as in Prague. More like a student city. On the main square (rynek) there's a beautifully decorated town hall (ratusz). Since the city is built upon branches of the Odra river there's a lot of bridges. Very nice after sunset. 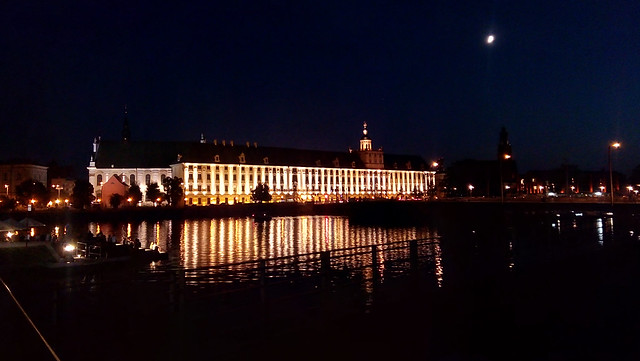 On one smaller rynk there are wooden beds instead of benches. I settled down on one and continued writing. It was very warm evening. 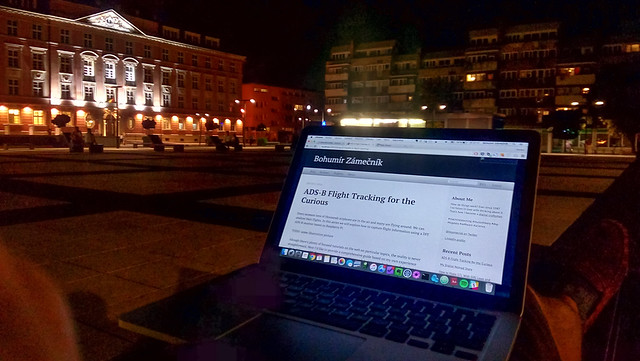 Near the hostel they have yummy wraps in the Yummy Wrap bistro.

In the hostel it was not easy to fall asleep even though I had earplugs since it is located very close to many discos. They played till 3:45 AM :(.

The hostel stay included a breakfast in a nearby cinema bistro. They had a delicious salmon sandwich and quite a good coffee. Good start of the day.

In one park near the river I continued writing. Since I forgot to charge my computer I found a nice coffee near the rynk. They had a delicious vegetable ciabatta with hummus.

I decided to create a Slack channel for talking about ADS-B Flight Tracking.

It was also possible to charge my equipment in a bigger shopping center. Thanks to the noise-cancelling headphones it's possible to do some work even in a loud buzz from the people.

I reserved a hostel (Cinnamon) nearby and relaxed after a day of walking. Then I could continue writing. Altough there was no disco till the night, still a loud fan on the outside wall was humming so the sleeping was not perfect.

I slept better than yesterday but it could be better. In the morning I was correcting my brother Pango's text for his crowfunding campaign (PIANOmad.com) - live video broadcast of his piano improvisations from New Zealand's nature.

Then I came to a park to write the ADS-B series. It's nice that a public city wifi works even in a park.

I noticed some armored transporters and hummers drive by. The city center was crowded. I thought it's some marathon for 9/11 but there a lot of soldiers were standing in lines. It was a promotion of new soldiers. The day was hot and I didn't envy them standing there maybe hour or two. 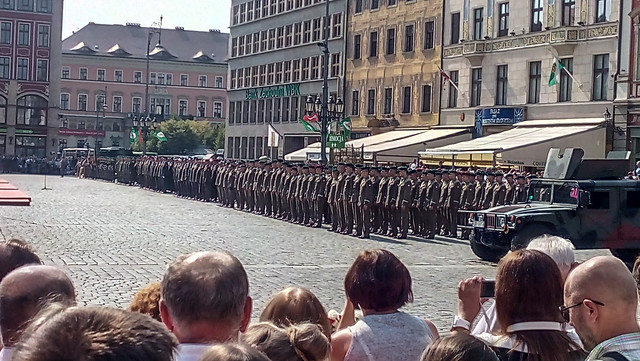 In a coffee house I found out that all the hostels and AirBnb rooms are already full :(. Only some quite expensive were available. So I tried to contact some people via Couchsurfing.

In the afternoon I moved to a small island and made an open-air office under a tree. It was quite pleasant. 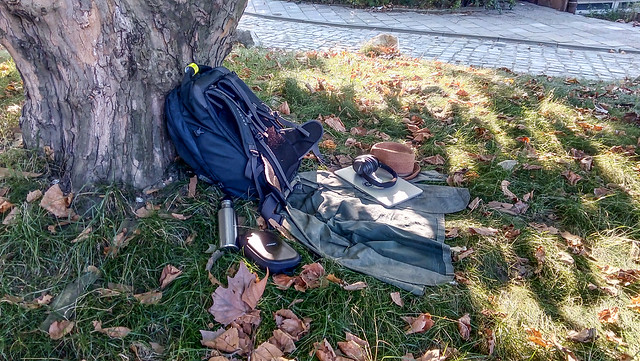 On Couchsurfing Hangout I met two guys, Andrzej and Dominykas (from Ukraine and Lithuania), at a boat pub near a park island on the other side of the river. Both were IT guys and we spend a nice evening at a beer.

During the day no host accepted my couch requests. Since it was a tropical day and the weather forecast for the night was 16 ˚C I decided to try camping in the wild somewhere near the river a bit outside of the city :) On the map I found Las Rakowiecki near the Oława river around 4 km from the center. I took me about an hour to get there.

In the forest I had to take my headlamp and soon some eyes were staring at me from the dark. I went on the forest path and instead of a dry sparse woods there were juicy hedges. Near a bridge over Oława I saw some campfire and people around. Either students drinking or some homeless guys. They had a LED light, so I called to them and joined the group. Indeed, some young people making a barbecue and drinking on a campfire spot. We chatted with Emil, an IT student. Then we sung a bit and another guy played some harmonica tunes. Interesting encounter.

After the midnight they went home and I went to sleep. I didn't have any sleeping bag, pad or tent. I just put my green heavy cotton blazer underneath and put all the clothes on. Fortunately, the fire was still burning and a few large branches were left.

The night was quite tough. But I chose it voluntarily. In fact as a kind of a bit harder comfort zone challenge. Just to make sure I can withstand it.

The whole night I could not close my eyes. It was not so warm, I was a bit afraid of an animal or human attacking me or robbing me. For any case I had my pepper spray witha LED light prepared in my hand.

Altough I was on a meadow in a forest and I thought it would be a calm place a disco nearby was playing until 4 AM. Not much better than the Friends Hostel. I paid attention to the various forest sounds like falling branches or crowing ducks. And I had to keep the fire on every half and hour or so. Still I could not sleep.

Sometimes after 5 AM some faints came upon me and I fall asleep for a few minutes. Nevertheless at that moment I heard a person coming from the path. So I jumped up with the LED light and called upon him what's up. He just mumbled something about the fire and turned around. His jacket was shining with some reflective stripes. So most probably it was a hunter or forest keeper. At least he didn't fine me for the fire.

At 5:30 the sun started to rise and sometimes a cyclist rode across the bridge - it was a bike path. After that I could not sleep more. 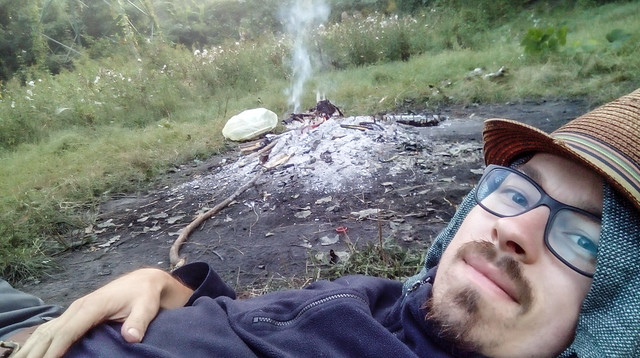 At about 7 AM I packed my things, shut down the fire with some green water and went towards the city. At least both me and my blazer have survived it. But then I said to myself. Well, I managed it, but that's enough for a while. There's some work waiting for me, so let's get some comfortable AirBnb room for several days and focus on the work.

During the morning I was not so tired and went for a walk around the Oława park. It was an amazing sunday misty morning. Then I headed for the bus to Kraków, the next destination. 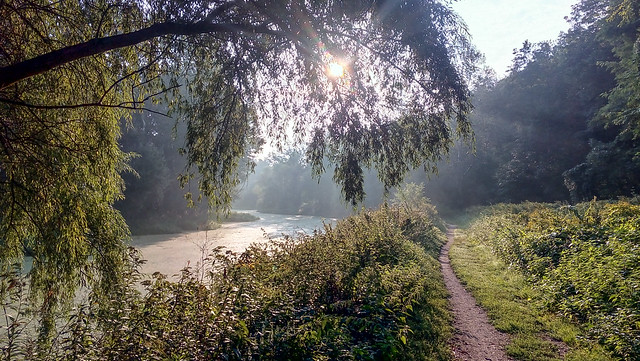 The whole gallery of photos